Best of the decade - fashion

One only needs to see a few seconds of any Eurovision performance and you can usually recognize what decade it is from. Apart from the distinct changes in musical style and production from each era, another major pointer will be the fashion that performers chose to wear.

The 2010s was very diverse for fashion in general and trends varied from styles like hipster/grunge and 80’s inspired bright neon, to the return to the preppy and more formal looks of the latter part of the decade.

At the Eurovision Song Contest performers need to push boundaries to get noticed. Hence why the competition is more synonymous with the more eye-catching and sometimes utterly horrendous fashion choices.

Let’s have a look back at some of the more memorable looks of the last decade.

It can be difficult to stay on-point with fashion trends when you’re vying for the world’s attention. To able to combine what’s on this season’s catwalks or selling on the High Street, with an outfit that will wow audiences is easier said than done. 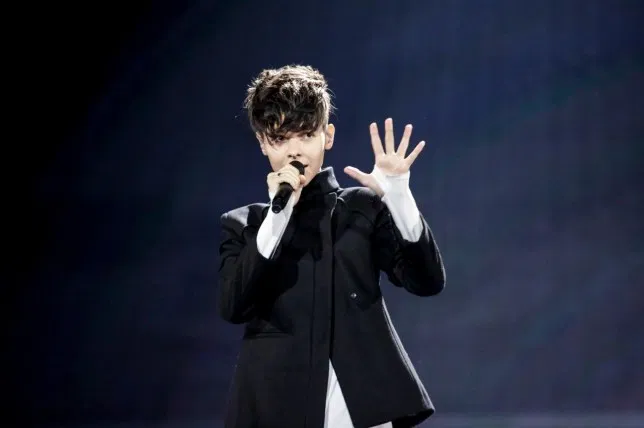 BULGARIA 2017 - Sometimes it’s difficult for men to stand out in the fashion stakes but Bulgaria’s Kristian Kostov was an exception. A great modern take on the traditional black jacket on and white shirt. It was sleek, it oozed class and was a perfect match for the contemporary performance he put on.

NORWAY 2013: Margaret Berger’s choice of Eurovision stage attire is as much a triumph today, as it was in 2013. The figure-hugging full-length white gown had futuristic elements that stayed well away from costume and kept the striking Norwegian looking modern and sleek. It’s tailored beautifully and even the slit in the dress is perfection in its positioning and length.

Eurovision is famous for some of the stunning, and sometimes questionable choices of frocks. Here are some of my picks for the best ones from the last decade. 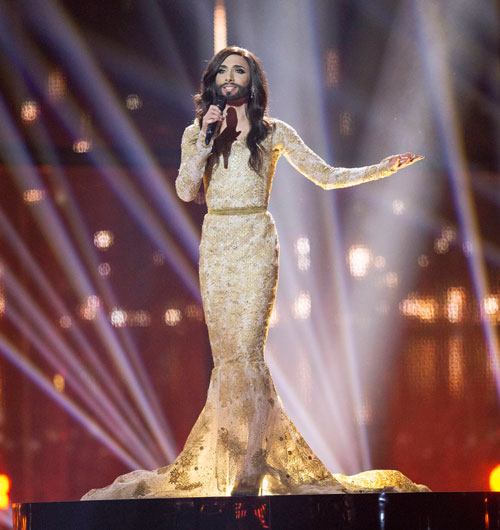 AUSTRIA 2014 – Conchita was always going to be one of the eye-catchers in Copenhagen and she adorned the stage in an exquisite choice of gown. Golden and lace covered with a belted waist it went into a fishtail silhouette from the knees down. It was stunning but didn’t take any attention away from Conchita and her epic performance.

AUSTRALIA 2016 – Permanently on public display at the Australia Music Vault in Melbourne, the dress that nearly carried Dami Im to victory in Stockholm is now a piece of Australian music history. The gown gave Dami a highly sculptural silhouette and is made from an Italian organza with an amazing metallic piping running through it. Like the singer herself, it really hit the heights on the Eurovision stage.

Traditional garb will always be a Eurovision fashion staple, but it doesn’t have to be unoriginal or twee . A modern take on traditional can be a great way to honour your countries heritage without looking like your about to dance for tourists in the local town square. 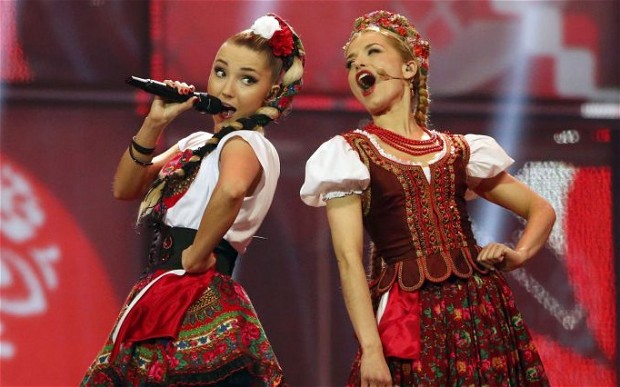 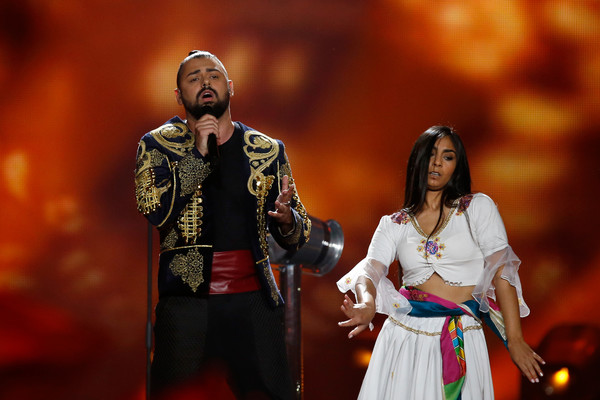 POLAND 2014 – Well this is iconic for many reasons, but the outfits the ladies chose were perfect for the performance. Yes, it’s all very suggestive and cheeky, but the choice of clothes sold the ‘Slavic’ message and kept them looking vivacious and sassy.

HUNGARY 2017 – Joci’s song and performance was always going to have a distinct Romani vibe and his choice of clothing was perfect. The all black outfit was stunningly embellished with gold and a splash of red finished it all off brilliantly. He avoided clichéd and looked majestic.

Cohesive certainly doesn’t mean wear matching outfits. In fact, that can be a massive faux pas at times. But viewers should be able to tell you’re performing together and have put some thought and co-ordination into how you’ve dressed. 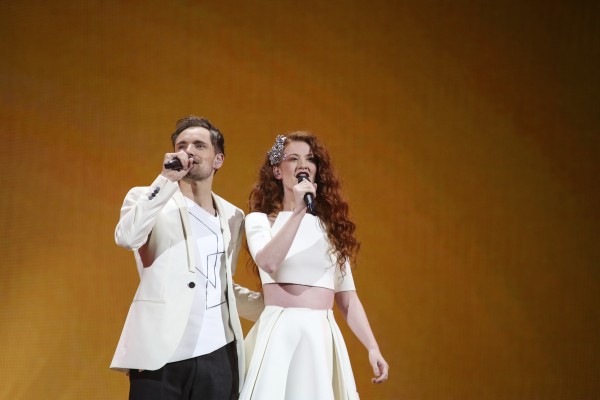 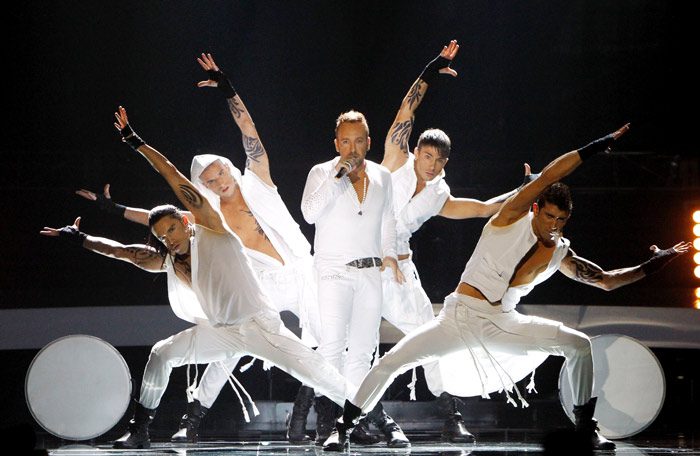 NORWAY 2015 – Mørland and Debrah looked picture perfect when they took to the stage in Vienna. Their outfits complimented each other perfectly and could easily originated from the same designer collection. Mørland’s simple white jacket works well over the asymmetrical top he’s sporting. While the modern clean lines and well sculptured shapes of Debrah’s dress are divine. Her cropped blouse shows just enough skin and gives it a fresh youthfulness.

GREECE 2010 – I can’t say I’m a massive fan of some of the individual pieces on show here. (I’m looking at you and that open neck t-shirt and beads combination Giorgos!) But ultimately Giorgos and his friends do look cohesive in their all white ensembles. Overall the gents look the goods and the clothes have a good blend of modern design and some traditional Greek elements.

I don’t do costumes and nor should anyone not in the clown industry. Stay away from them people! Instead, let’s have look at couple of times performers have really made a statement with their choice of garments on stage. 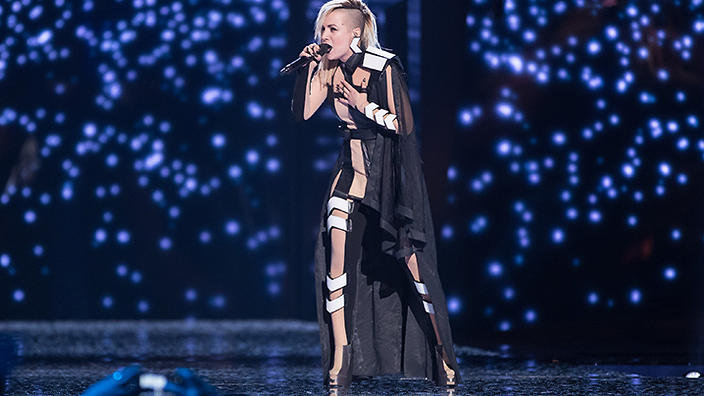 BULGARIA 2016 – Poli Genova’s choice of dress at the 2016 contest does split people. I don’t mind the overall look and construction of the dress. It mixes different materials and gives the dress some interesting texture… Then there’s the lighting up part. I’m still torn if this works for me, mainly because they look like they were tacked on as an after-thought. But overall, it’s turned into somewhat of an iconic look, so it can’t be that bad.

LATVIA 2015 – Let’s face it, there’s been a lot of red dresses vying for attention at Eurovision this decade. However, nobody managed to capture interest quite like the amazing Aminata when she took to the stage in that red dress. Daringly low cut and beautifully form-fitting at the top it explodes into a ludicrously oversized fishtail bottom. Giving the dress the sense of grandeur that matched what the mesmerizing Latvian diva was delivering in her performance.

Pantsuits! Nothing is more fabulous or timelessly fashionable on a lady than a delightful pantsuit. On this front Eurovision of the 2010s really delivered the goods. 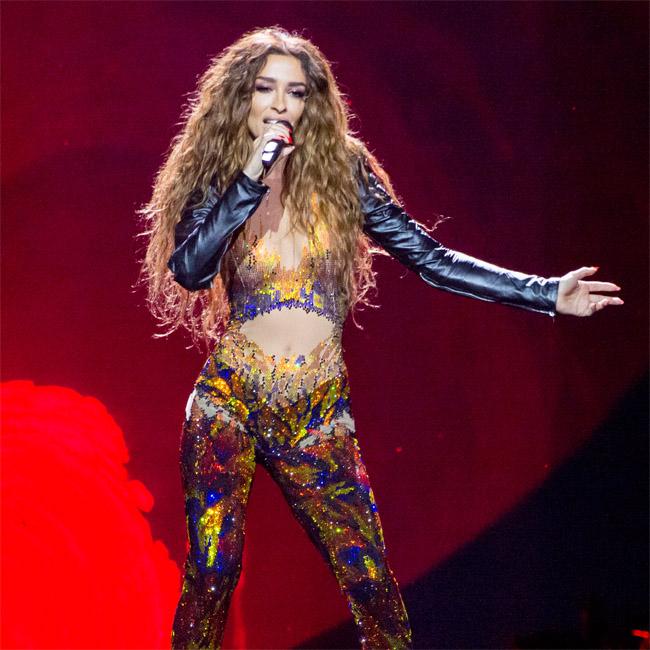 CYPRUS 2018 - It’s colourful, it’s fabulous and most importantly for a skin-tight outfit that shows a lot of skin – It’s tasteful! This type of outfit could’ve easily been crass. Instead we got well-tailored, glam, fab and iconic. There’s nothing not to like about this. Like Eleni herself, it’s smoking hot and perfection.

GERMANY 2011 - 2010 winner Lena deserves snaps for her amazing 2011 pantsuit she wore for the performance of ‘Taken by a Stranger’. It’s black. It’s sleek, and it really displays that the performer we saw last year has evolved. It also works brilliantly with her dancers and makes for a very cohesive overall performance. A clever a­­nd very flattering choice Lena.

There we have it, my take on what was an interesting decade in fashion for the contest. It probably wasn’t as bonkers as the previous decade, having said that, we did have Cezar, Jedward, those Moldovans in pointy hats and the most talked about outfit to take the stage in 2017 was someone in a mankey looking monkey suit! Maybe it was a little bonkers?